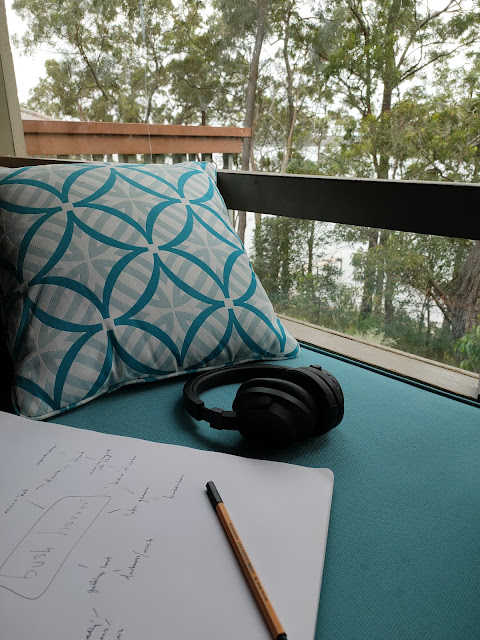 Despite a very rainy and windy first few days, we settled into Gunyah like it was home. We made friends with a trapped microbat, explored all the various nooks and crannies of the house, and learned the personality of the wood fire (eventually). 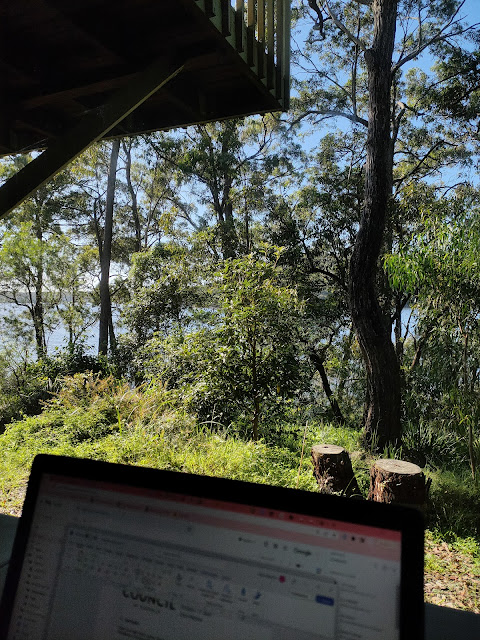 While we intended to write poems about the body's relationship with nature, we felt like we were somewhat closed off in our warm, dry house/cave, and it took us some time to come up with a collaborative approach to writing about our experience.

Finally, on Friday 13, on the last night of lashing rain and wind, we sat in front of the fire, drank wine, and wrote 'Australian gothic' poems inspired by the water, the isolation, and the infamous poets' holiday on Lake Geneva where Frankenstein was written. Reading them out to each other was spine-tinglingly delicious, and excitingly outside of our normal ouvres. 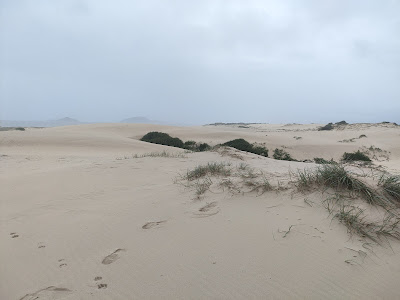 We took inspiration from the (very difficult) puzzle that we worked on during our down time. Turning those gothic poems about and mixing them up with a poem by Lord Byron, we came up with some truly wild collaborative work that we will continue to pursue after finishing the residency.


Blake Lawrence is an interdisciplinary artist working primarily in expanded realms of photography and performance. They make work informed by the material histories, icons and ecologies of drag performance and queer culture in Australia, and where they coalesce with photographic practice in documentation and archiving. They are devoted to responsibility and genealogy outside of biology, inhabiting queer history and design in the present, absence and residue, care, sex and pleasure in a practice-based research.
Borne from Yaegl Land and Waters in Northern NSW, Lawrence currently lives and works on Gadigal Land in Sydney. They are currently undertaking a Doctorate in Philosophy (Design) at the University of Technology Sydney (UTS). They completed a Bachelor of Visual Arts at Sydney College of The Arts, and Honours In Design (Photography) at UTS. They have exhibited locally and interstate, at Granville Centre Art Gallery, Firstdraft, Airspace Projects, C3 Contemporary, Blindside, Seventh Gallery, The Walls, Verge and more. They have presented live work at the Sydney Biennale, Brisbane’s Spring Hill Reservoirs, the Art Gallery of NSW and Newcastle’s This Is Not Art. As Canoe they have performed drag at Club Kooky, Tropical Fruits, Falls Festival, Groovin The Moo, Sydney Mardi Gras and more.
During my residency at Gunyah, I plan to commence material explorations for my PhD research project Flaming Galahs (working title), continuing my critical investigation into relationships between design in Australian drag communities (fashion, jewellery, object, performance, etc) and local ecology and geography. I also intend to continue some writing projects, and immerse myself in bushwalking, birdwatching and scuba diving in the local area.

Claire and Sarah met at a creative writing conference in Perth in 2018.
... We bonded over beers and discussions of mental health, particularly anxiety. Independently, we’ve both been writing about mental health and what it means to possess and inhabit a body for years, so we wanted to spend some time collaborating to investigate these issues more deeply and explore what arises from combining our respective voices and experiences.
During our residency at Gunyah, we plan to create a collaborative zine of poetry about materiality, mental health and the panic of being a contemporary body-in-world. Using a new term coined by Albrecht – the 'panic sublime' – we'll investigate bodily relationships with environment under threat.
Dr Claire Albrecht is a Newcastle based poet and has recently completed her PhD. She was the 2019 Emerging Writers Festival fellow at the State Library of Victoria, a 2020 Varuna ‘Writing Fire, Writing Drought’ fellow, and will be a resident at the Helene Wurlitzer Foundation, New Mexico in 2021. Her debut chapbook 'pinky swear' was published in 2018.
albrechtpoems.com
@calbrek
Dr Sarah Pearce is a poet and researcher from Tarndanya/Adelaide. Her work appears in Aeternum, Outskirts, Meniscus, Writing from Below, TEXT and various anthologies. She has held residencies at Adelaide City Library and FELTspace gallery and performed at Blenheim Festival and Adelaide Fringe Festival. She writes on female embodiment, the Gothic, queer narrative(s) and mental health.
sarahpearce.org

My time at Gunyah was incredibly nourishing. I had been very flat out with work in the city, coming to the final stages of a nine-month curatorial project. I still had the curatorial essay to write, and there was no better place to do it than in the quiet natural splendour of Gunyah. 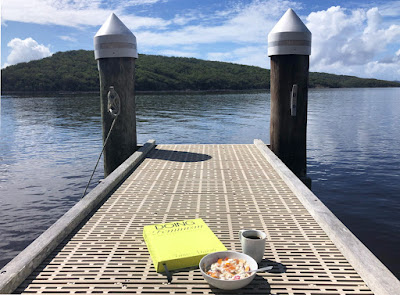 Looking back, most of my photos seem to be on the jetty. That's really where I spent most of my time! In the midst of a long stretch of rain for the East coast, I was lucky to get some sunshine during my trip.

I spent my time thinking, reading and writing about feminism in art in Australia. I was writing about Garage Graphix, a print-making and community arts organisation that operated in Mount Druitt in the 80s and 90s. These photos show a report from Garage Graphix in 1988, and the great new tome of a book 'Doing Feminsim' by Anne Marsh. 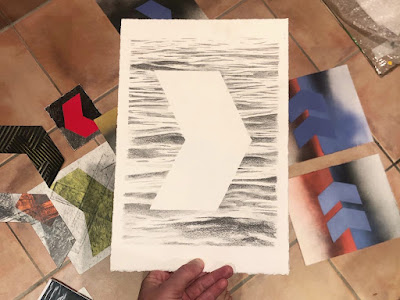 I also took some time to do some drawing. I have been thinking a lot about direction and movement in the city, how we are pushed around by systems and signs and symbols. Out there on the lake the movement was all determined by the wind and the tide. The Biennale 'Rivus' is on in Sydney, so it has been making me think about water a lot. I did this drawing on the final day... a bit of a 'thought bubble' work, that may or may not lead to something new.


On the final day I was doing yoga on the jetty, and a big pod of dolphins swam past. I mean, how do you top that?
Thanks Gunyah
Nadia Odlum
Gunyah residency report
March 2022
nadiaodlum.com@nadiaodlum 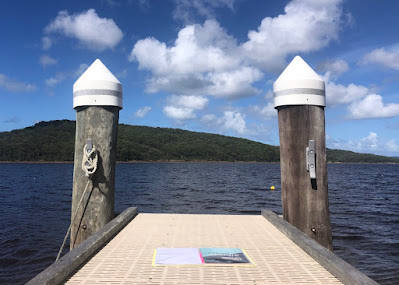 Nadia Odlum is a multidisciplinary artist from Sydney, living and working across Eora and Dharug land. Driven by a fascination with urban environments, Nadia creates playful and immersive works that explore personal and collective experiences of space and urban architecture. Often working site-specifically, their output spans sculpture, drawing, painting, installation, artist-led workshops, and performance collaborations. The works are inspired by movement, patterns, and forms within the built environment, mirroring and abstracting these elements to form new spatial and material relationships. Central to Nadia's practice is an investigation of perceptual experience, and how urban space impacts encounters and relationships between individuals and communities.
nadiaodlum.com
@nadiaodlum
During my residency at Gunyah, I plan to taking advantage of the solitude and different 'pace' offered at Gunyah, using my time to explore different ways of depicting movement through drawing. My research at Gunyah will feed into a choreographic/drawing workshop to be presented with the Biennale of Sydney in April. 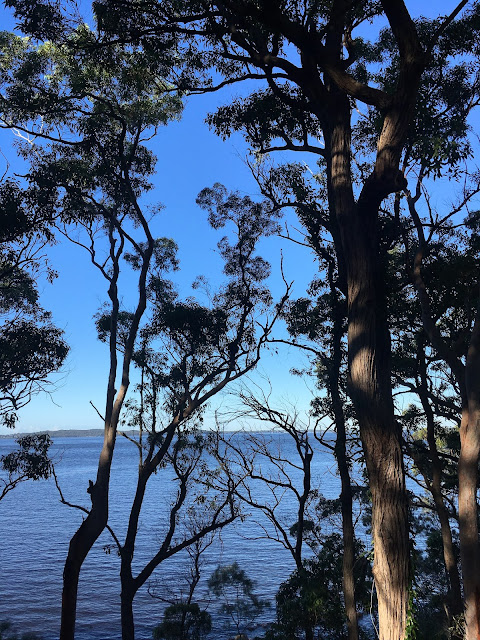 Coming up in 2022 there will be seven artist residencies at Gunyah, on Worimi Land. We have several artists whose residencies have been rescheduled due to NSW COVID lockdowns and some who narrowly missed out on being selected for residencies previously.

Here's to a new year and hoping it goes more smoothly!

After months of lockdown, heading out to Gunyah was pretty bizarre, considering I didn’t branch out of 5km for the duration. The first time I had filled my car with petrol in months was uncanny. 1st of November, travel opened up, and off I went to Gunyah. I packed my car with all my equipment (there was a lot) and blasted the playlist I made for the trip down.

After I arrived unpacked and settled, I spent the first couple of days drawing embroidery, Croatian folkloric patterns. Specifically, I have been influenced and researched Croatian/ Bosnian tattoo patterns used during the Ottoman Empire to prevent women from being kidnapped. I mixed with contemporary gender symbols to merge ideas around gender and sexuality with my culture. Part of this work is to try and create a new hybrid cultural experience/expression to the inclusion of sexuality. Often Queer diaspora are not able to merge their queerness with their culture due to needing to hide their sexuality. I drew these symbols on a white shirt and a dress to create a new type of Folkloric costume. In doing so, I created Zlata and Zlatko, who reflect the Jungian Anima and Animus, the collective unconsciousness of masculine and femineity. I was grateful to have my friend Anthony come up to help me take the images.

Part of being at wonderful Gunyah is its peacefulness and the space to contemplate. It was great being able to merge images and have the space to experiment. Fashion designer Sally Jackson came up, and we experimented with wearable art using paper and fabric. These are quick exercises to look at the form, the body. We also enjoyed a swim. The water was so lush! The water is healing, and hearing the waves hit the shore is regenerative.

I woke up one morning, and made a friend. We stared at each other for a long time. It was like were mutual gazing.

I spent about a month before Gunyah making these miniatures, which are a return to a project I did in 2010 (my honours year) where I made a 1:100 replication of my house with video screens in the windows. These 2021 miniatures are made with balsa wood and various materials around my house, except for the wheelchair I bought online, as I didn’t have time to make it before Gunyah. These are for a video work called Body says, No. The work involves a directional soundtrack and movement. I spent a few nights filming these and hope to have the video and soundtrack complete next month.

A dear friend and artist Cherine Fahd came up for an evening where we swam and enjoyed the jetty. The calm and movement of the waves brought much contemplation. I have to say the Jetty was the place I visited daily and spent a lot of time sitting and laying there writing and thinking.

Taking my camera out and performing and filming on beautiful Worimi Country was such an honour and blessing. I am grateful for the opportunity. Thank you so much, Gunyah and everyone that makes this possible. The making and time I spent were irreplaceable.