Gunyahnut: an exhibition by Michelle Brodie from her time as a Gunyah artist-in-residence 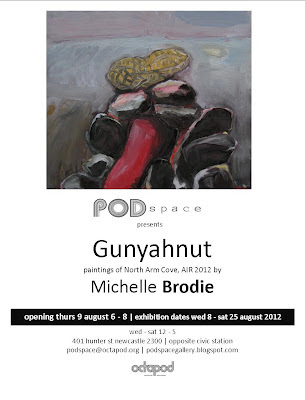 Michelle Brodie was an artist-in-residence at Gunyah in April 2012, to read more about her practice please see www.michellebrodieartist.blogspot.com.au


Kate Brown, Anastasia Freeman, Michelle Genders, Robin Hungerford, Renee Oldfield and Thomas Hungerford are a group of friends who each have their own art practices and are coming together to work on a collaborative project. During their residency at Gunyah they plan to work together within the structure and process of film making. This filmatic project will extend their individual practices, as well as open up new and interesting possibilities through collaboration. They will be combining their own individual experience in object, performance, environment, technique, costume, lighting and place.

Aiming to create an art house style film with supernatural, real and surreal elements in a naturalistic setting focusing on the sea and the bush, we’ll each create an idea for a scene in the film and take on the role of directing this scene. Our collaboration will link scenes together through video and non-linear/linear story boards, using editing processes and other effects to complete the film. We imagine that our resulting film will be a series of vignettes with similar themes running through them alongside six different trajectories. This process will imagine a dreamscape of different ideas and techniques while providing a platform for our individual input to fit together. This project lends itself to various creative outcomes as we are all highly technical in our approaches to creative development. Although we are practicing artists in various creative fields, our interests and aesthetic ideas correlate and we have a great respect for each other’s work. After the residency, we intend to create individual spin off works from the film that may be shown as part of a group show at a later date.

Kate Brown is an artist and musician. She has exhibited at Firstdraft, been in residence at Anyplace Project Space and was a part of the 2011 PACT Ensemble. With video, performance, installation and sound as major components of her practice Kate analyses the functions of the body/object to explore ways of remapping space and time. While the themes that occupy her practice are vast, she strives to investigate surreal, subtle illusory and technical qualities in light, sound and movement. Kate is currently undergoing a mentorship with PACT theatre’s Julie Vulcan and Cat Jones and collaboratively devising curatorial art projects for the UWS archive, Sydney Museum and Historic Houses Trust.

Kate has studied Fine Art at the University of Western Sydney and been awarded a Bachelor of Visual Arts with Honours from Sydney College of the Arts, The University of Sydney. There are many influences that come into Kate’s practice; her main focus is directed at the subtitles of the world and documenting them. She has exhibited widely in Sydney and interstate, and is determined for her rigorous art practice to take her far and wide collaborating, exhibiting and creating. Kate Brown is currently working on new projects that intertwine her visual arts practice with contemporary performance methods.

Anastasia Freeman is an interdisciplinary artist working with drawing, video, performance and installation. Anastasia creates a rich visual language that operates within the construct's of its own other-worldliness. Whimsical gestures and weaving narratives inform much of her practice. Her recent work leans towards that of the relational and has been collaborative in nature.

Anastasia trained at The Julian Ashton Art School, The School of Contemporary Arts, University of Western Sydney, and has been awarded a Bachelor of Art Education from College of Fine Arts, UNSW. Currently she is the Art Editor and contributor for Pan Magazine literary biannual. She has been making and exhibiting work consistently for the past decade, collaborated on projects and curating Sydney exhibitions and fundraisers. In more recent years, her art practice has become a vehicle for exploring and documenting relationships and the relational through interactive installations and various forms of portraiture.
For more information information and images of Anastasia's art practice please see www.lamaisondemilleplateaux.blogspot.com.au

Michelle Genders is a Sydney based emerging artist. Her multidisciplinary practice includes drawing, small scale sculpture, wearable objects, installation and images. She uses a mixture of enduring and ephemeral materials to generate gestural and expressive work. Michelle's process is labour intensive and meditative where simple solutions are chosen. Her current body of work explores the intersection between science and spirituality with respect to the polarity that appears to categorise our experience - that which is inside of us and that which is outside of us. Aspects of these areas that she has been researching and responding to include cosmology, rhythms in nature, human interpretation of nature and the cosmos, mystical poetry, visual illusions and human perceptual processes. Her own experiences in the natural world have also influenced her work.

Michelle has been awarded a Bachelor of Visual Arts with Honours in Jewellery and Object studies, from Sydney College of the Arts, The University of Sydney. Her work has been included in the annual Utility exhibitions and national exhibitions including The Exchange Project, Graduate Metal 12, Flight and Awareness Muscle. In 2011, she curated and exhibited in Above Earth Below Sea, a group show of work by Japanese and Australian jewellers. Recently Michelle was a studio resident at Firstdraft Depot Studios and presented her resulting work in her first solo exhibition Phenomenal at Paper Plane Gallery in Rozelle.
For more information and images of Michelle's art practice please see www.michellegenders.blogspot.com

Robin Hungerford is interested in the ways in which technology shapes our culture, our perception of the world around us and the interior worlds of our own bodies. His amorphous and enigmatic video works allude to a kind of blossoming biology which may be the result of increasingly sophisticated genetic interventions or perhaps even their unexpected side effects. Meanwhile colourful mixed-media constructions, encrusted in simulated plant growth, take on a life of their own; thriving like weeds on the fuzzy boundary which separates the synthetic from the organic and hints at the new plasticity of life as we know it.

Robin is a Sydney-based artist whose work utilises a diverse range of media and techniques including papier-mâché, drawing, video, kinetic installations and, on occasion, live insects and animals. More recently his practice has expanded to include himself as a performer in videos and live works. He has been awarded a Bachelor of Fine Arts from the University of Western Sydney and a Master of Visual Arts from the University of Sydney. Robin has exhibited regularly in Sydney artist-run-initaive galleries, was a finalist in the 2010 Helen Lempriere Travelling Scholarship and one of the artists featured in Let the Healing Begin at the Institute of Modern Art in Brisbane. Hungerford's most recent work Shamanic Organic Contemporary Cuisine is a live multimedia and performance spectacle loosely based on the format of a televised cooking show, and was featured as part of the 2012 Nextwave festival in Melbourne.
For more information and images of Robin's art practice please see www.robinhungerford.wordpress.com


Renee Oldfield is currently studying production design at Enmore Design Centre. She works across illustration, textiles and video; around the themes of natural forms and the human body. Renee has assisting with theatre technical production and set design in a number of theatre performances in Sydney and the Blue mountains. She also expands beyond theatre working in experimental performance, collaborative projects and her own solo practice.

Renee is originally from Blue Mountains and has a background in fine arts and theatre production. In 2009, she lived in London where she worked on live performance art shows and worked at the Victoria and Albert museum, assisting with exhibitions as a volunteer. She has worked with a Sydney based poetry group Caravan Slam in Sydney and at the Pete's Ridge Music Festival.


Thomas Hungerford is an artist and multi-instrumentalist. His practice revolves around creating audio and visual installations made from a variety of materials such as musical instruments, electric motors and a variety of modified ready-made objects. These installations are designed to create a feeling of 'otherworldliness' and induce a hypnotic-like trance within the viewer. Thomas also performs bass guitar and vocals in the experimental grind-core metal band Mother Eel.

Thomas has been awarded a Bachelor in Fine Arts with Honours from Sydney College of the Arts, The University of Sydney. He explores the uncharted territories of the human subconscious, alternative realities, popular culture, peoples relationship to the planet, existential possibilities and the unknown. His work consists of video, audio and sculpture as installation; is often interactive and relies on the viewer’s presence to function.

Being school holidays we approached our Gunyah stay in a hands on way - with all the family working on drawings, paintings and sketches. Even when visiting the sites around the area we would stop to capture the view with a drawing.

Coming from a suburban landscape we enjoyed the shift in pace at North Arm Cove, seeing wallabies, looking out through trees, warm fires, and the gentle lapping of the water.

...here is our visual response to our stay at North Arm Cove.