My time at Gunyah was solitary and fulfilling, with some interesting experiences and not just through art. I travelled around the area and invested some time at 'Stroud' researching the landscape and painting but mostly I remained on the Gunyah property supervising my environmental impression-mark making drawings from the trees.

I had many ideas to make things. I used charcoal from the fireplace, pens and inks. I broiled a gum leaf tea and used the rich smelling concoction to stain or dye the surface of papered drawing works. I collaborated with nature, or facilitated with it, and the natural environment to make the marks. I had the wind and branches communicate to me back on paper through kinetic processes and impressions. I cut and rearranged the natural original order of the mark making by the tree and wind, as a purposeful metaphor for where humankind habitually re-orders environments from chaos or entropy. But unbeknownst to us that could also be an evolved natural pattern of things like the Fibonacci sequence which is also found in nature in different ways. The brown stains are a dripping of gum leaf broil that I made when I was experimenting with gum leaves.

I also thought of a ways to get mark making from the waves that greeted the shore near the jetty but I ran out of time. A project now for another time. I also cut gum leaves for an idea for a large painting for next year where I started to flatten and dry them between wood boards. I recorded animal sounds and noises of the nightscape and the dayscape, of animals and winds for some audio and video works later.

Sometimes my habits caught up with my reality from a different perspectives and reminded me of my daily addictions. For example, having spent time working on my art, I would sit down with a cup of tea on break, presuming to relax at lunch infront of the TV. That's right, there's no TV! I caught myself twice on the first two days staring at the fireplace at lunch time, reflecting on my expectations for the rest of the day, before I changed that habit. So instead of watching the box I watched the scenery on the balcony. I don't often draw from life but I drew a visiting Kookaburra. I'd lost touch with traditional drawing. The Kookaburra came back several days in a row with a junior sidekick, followed by the darting native Mynor birds around their faces. A Magpie there too.

Earlier, I'd seen the Kingfisher use his beak, cracking and whacking it, onto the wood like it might be a small snake before eating. I'd never noticed that hard blunt noise before. I'd never seen the power of such a small bird even as a kid growing up. It made me think of all the endangered fauna and flora we are losing in the world as part of my arts practice - the 'paradigm of sustainability'.


At Gunyah, there was no shortage of Lorikeet shrieks or bats at night. I had the chance to film a nice slo-mo of a magpie who came to say hello too when I was on the balcony. It gave me some ideas for printmaking.

Overall, I achieved my goals of some kinetic, experimental drawing that I call the "Listening to Trees" series and tried my hand at Plein Air painting of the landscape in the shape of contemporary screenshots. I painted the trees in the backyard slope, train track at Newcastle and the bush. 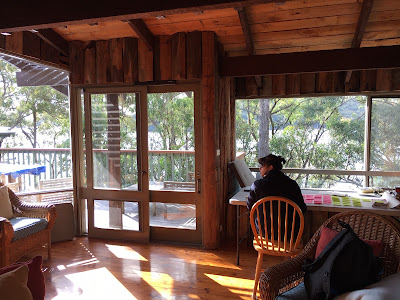 On the cusp at Gunyah

Hurtling along at 110 on the M1 is quite a propulsion. Churned with the anxiety of missing the turnoff. Then what? Where would I end up? Would it take me forever to find my way back?

But I didn’t. I slowed and found the turnoff to a quiet road which led to us through a few curly fork turns before it settling along the river.

A metaphor for the residency.

Filled with trepidation, I had planned for this time away. The hurtling began as I had filled my body with The Natural Way of Things, Eggshell Skull, An Isolated Incident and King King Theory, plus several recent newspaper articles about violence, and the Diane Brimble coroner’s report. Before I left Sydney I also purchased See what you made me do… but was unable to open it.

All of this bouncing around my little body curling around old memories all to the soundtrack of Kari Norgaard’s lecture “I’m not talking about denial”.

The foul of the air is my new work in development, and it is a difficult work to make. The content, of course, but it’s also the way the content rests in the muscles and bones, causing an eerie uneasiness of what is to come. In the dreaming and interactions with those who are unaware of what you are harbouring. You get angry, you see injustice everywhere and you look for violence in every thing in the every day.

I had to get this out, onto a page, away from me, at a safe distance.

The residency was to give me that safe place, so that I could vomit her out from me. But it did not happen that way. It was quiet. Still. She crept out without me even realising it.

The timber home is split with the snug deep in the belly of the building with a window seat that formed my place for the duration. Here is where the dreaming, thinking, crafting, sculpting would take place. Here is where I’d slumber through horrific thoughts. Abuse not experienced by many, but by all accounts, too many. Those remaining silent in the shadows that fall throughout homes across Australia.

I took myself on regular walks along the roadside, obsessed with some of the homes on the river. Feeling a certain unease as I passed by some and relief by others. I’d turn back, head another way and then another, finding a place where I could physically settle. It was down by the very edge of the pier where I found the solace. Helped by gusts of winds that threw themselves against my body. I was relieved. The splinters of cold shards pushed against my skin and I was alive. This was not a dream.

I’d return to the window seat with my butchers paper and post it notes. I had to understand how Heiner Goebbels’ coded Stifters Dinge. That was my best way forward. I could this composing technique to provide myself with a framework. That will be provide the life buoy. When I felt myself hurtle forward there was scaffolding to catch me.

I was happy that my dramaturg Mark Bosch had timestamped the work for me, so it was really about putting them into the colour codes so I could see it’s unique pattern. From here I would work to reorganised and reweave them into the script. Goebbels’ work is rich and complex and I hadn’t quite cracked its code. Frustrated, I went to Tea Gardens/ Hawkes Nest to shift the dynamic. There on Bennet’s Beach the pod of dolphins appeared. Body surfing through the outgoing tide. There was no resistance in their being. At peace with no sense of threat. I knew I had to find that peace, ride the surf without this resistance I was feeling.

After more dreamings on the pier, I started transposing Goebbels into my own treatment of theatrical elements. The sun skipping along the incoming tide. The full moon crafting shadows through the gums – these all found their way onto the paper. I was moving away from Goebbels’ structure and sculpting my own voice.

Back on the window seat I found the Wood piece, the nexus for the work. As if she Charlotte herself, had carefully left the book open to the chapter.

Gunyah was a safe place for me - to dream, to imagine and to sculpt new possibilities. 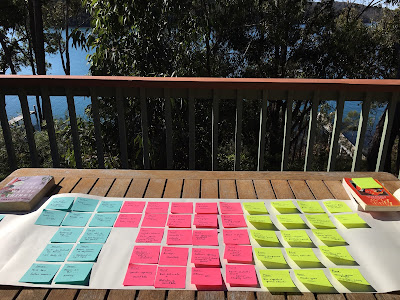