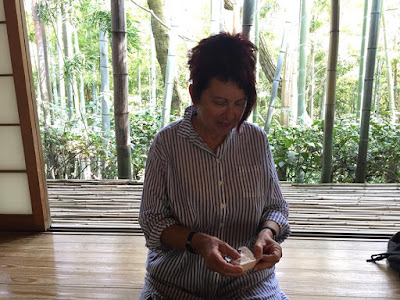 Sylvia Griffin is a Sydney based artist whose work focuses on trauma, displacement, memory and history, advancing the notion that contemporary art can offer a means to express grief and mourning as an alternative to the traditional monument or memorial experience. Sylvia's practice is materially diverse ranging across sculpture, installation, textiles, video and photography. She often employs materials traditionally used in memorial culture – such as metal and stone – unconventionally, to lend a playful yet political aspect in personalising and feminising this inherently masculine domain. Sylvia often works with a range personal objects to maintain a connection to memory and intimate families history, including using her mother’s dowry linen and filming herself unraveling then reknitting a 55 year-old childhood cardigan.


Over the past fifteen years Sylvia has exhibited in many exhibitions, awards and prizes, both nationally and internationally. She was the winner of the $20,000 Willoughby Sculpture Prize in 2013. Last year Sylvia was awarded a PhD from Sydney College of the Arts, the University of Sydney for her practice-led research entitled Inscribing Memory: Art and the Place of Personal Expressions of Grief in Memorial Culture. During the course of her postgraduate candidature she was the recipient of several scholarships and research grants. Later this year she will be presenting a conference paper based on her research and practice titled Presence and Absence: The Role of Contemporary Art in Engaging with Jewish Heritage in Krakow, Poland.


While at Gunyah I plan to create new work for several shows scheduled for later this year including an exhibition with photographer Anne Zahalka at the Sydney Jewish Museum and work for a solo show in the inaugural Biennale of Australian Art (BOAA) at Ballarat. I also hope to finalise my conference paper and take advantage of Gunyah’s beautiful natural environment to indulge in a little bushwalking and birdwatching!

To see more of Sylvia’s work please go to www.sylviagriffin.com.au

We arrived in the pouring rain during a cold snap. It rained constantly throughout the first night and day, and it took us a while to warm up. Yet only a couple of days into the residency, the sun shone and we were able to venture out into the bush. The wet leaves sparkled on the paths, and cobwebs in the undergrowth glistened with dew in the sun.


With the fire warming the house and the light dancing on the water below, we settled into the relaxing space, enjoying the changing colours on the water, soft pinks, cool greys and orange sunsets. One day the scene was even blanketed in soft mist. During our stay we caught glimpses of wildlife - sea eagle, kangaroos and even a pod of dolphins in a nearby bay.

Paula continued to explore ideas around ecology and perception. She collected fallen leaves and stitched them into expressive, single eyed masks, which formed the basis of an afternoon’s photoshoot in the bush - the very bush from where the leaves had been foraged. Nerine and her friend Christine, who was visiting for the afternoon, wore the masks and were photographed in amongst the tea trees, ironbarks and angophora and other plants near Gunyah.

Nerine also had a sewing project evolving;  stitching poetic words onto hessian. These will be part of a larger installation of sandbags and text. She also spent a part of each day reading and writing as shecontinuesher practice led PhD.  Nerine’s partner Craig  drove up from Sydney to celebrate his birthday with us. He stayed on for a couple of days over the weekend, when Paula took the ferry from Tea Gardens over to Nelson Bay to spend a night with family there.

Evenings were spent by the fireside, after co-created meals, talking about art as well as our shared experiences.  Often time, reading or even stitching happened now, the slow meditative type that really allowed us to unwind and reflect upon our lives happenstance.

In the studio, we both experimented with frottage techniques, rubbing leaves and text to make layered impressions onto thin paper, and Paula even tried out an idea she had involving burnishing and printmaking.

Overall it was a wonderful, relaxing stay in the homely, healing environment of Gunyah.  The house exuded the feel of family times, and friendships continued and forged.  We could imagine many celebratory lunches and dinners around the kitchen table, overlooking that view! It allowed us the time and space to experiment and create and to cook and share wonderful meals throughout the stay.